Archibald Campbell Fraser of Lovat (1736–1815) was a British diplomat, serving as consul in Tripoli and Algiers and also as MP of Inverness-shire. He was born on 16 August, 1736 as son to Simon Fraser, eleventh Lord Lovat (1667–1747) and his second wife, Primrose Campbell (1710–1796). Simon Fraser was a Jacobite leader in the Battle of Culloden, and after he was captured for treason and executed at the Tower of London in 1747, Archibald was sent to Glasgow where he attended university from 1750 to 1752. He married Jane Fraser, daughter of William Fraser of Leadclune, Inverness in 1763. Together they had five sons, all of whom Archibald would outlive.

Upon the death of his elder half-brother, Lieutenant-General Simon Fraser (1726–1782), Archibald inherited his family’s estates in 1782. He also succeeded his half-brother as MP of Inverness-shire and would hold his seat until 1784. In Parliament, he supported lifting the ban on Highland dress and opposed the East India Bill. He is known as overseeing the establishment of peace in 1764 between Denmark, Venice, and the Islamic states of Africa, and for preventing British subjects being enslaved.

Fraser is known to have been the individual to commission the building of Boleskine House, which was completed 29 November 1809. He died 8 December 1815 and was buried at the churchyard at Kirkhill, Inverness-shire. All of his sons having died before him, his estate passed to his fifth cousin, Thomas Alexander Fraser (1802–1875). 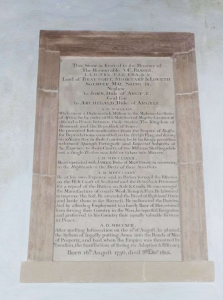 Memorial of Archibald C. Fraser at the Kirkhill Cemetery in the Wardlaw Mausoleum.

This Stone is Erected to the Memory of
The Honourable A.C. Fraser
L.L.D. F.R.S. F.A.S. F.S.A. & &
Lord of Beaufort, Abertarf & Loveth
Soldier, Mac Shimi 38,
Nephew
To John, Duke of Argyle
God-Son
To Archibald, Duke of Argyle
A.D. MDCCLXIV
While upon a Diplomatck Miffion to the Mahamodan States of Africa, he by order of His Moft Sacred Majesty George III effected a Peace between these states, the Kingdom of Denmark and the Republick of Venice.
He procured Indemnification from the Empire of Ruffia
For Depridations committed on the Britifh Flag and during His 10 Years stay in those countries he, by his King’s permission Redemmed Spanifh Portugefe and Imperial Subjects at
The Expense to those courts of two million Sterling, while Not a single Briton was sold or taken into Slavery.
A.D. MDCCLXXXV
He at his own expense and in Perfson furvey’d the Fifheries On the West Coast of Scotland and the Hebrides, and Petitioned For a repeal of the Duties on Salt & Coals. He encouraged The manufacture of coarfe Wool, Hemp & Flax. He laboured To improve the soil. He amended the breed of Highland Oxen And broke them in for Harnefs. He meliorated the Dairies And by affording Employment to a hardy race of Men, return’d From serving their country in the Wars, he repreffed Emigration And preferved to his Country their equally valuable services In Peace.
A.D. MDCCXCII
After quelling Insurrection on the 10th August, he planed
the System of legally putting Arms into the Hands of Men
of Property, and had, when the Empire was threatened by Invafion, the Satiffaction of feeing its Adoption and Efficacy. Born 16th August 1736, died 8th Decr 1815.

Special thanks to Andrew Wiseman for providing historical information