Aleister Crowley (born Edward Alexander Crowley, October, 12 1875) was one of the more notorious owners of Boleskine House. Aside from his notoriety for 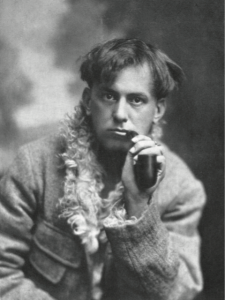 being an efficacious author of esoteric literature and poetry, he is also known to history for his achievements in setting record mountain-climbing feats for his time and as a champion player of chess.

Crowley purchased Boleskine House in August 1899, supposedly paying twice its market value from Mary Rose Hill Burton. It was at the former Fraser Highland estate that he would take up a spiritual retreat, or what he considered a “magical retirement,” for which he felt Boleskine with its serenity and remoteness was the perfect location. He wrote in his autobiography, “I had picked out Boleskine for its loneliness. Lord Lovat and Mrs Fraser-Tytler, my nearest neighbors, were eight miles away, while Grant of Glenmoriston was on the other side of Loch Ness.”

Departing the bustle of Victoria Street in London, Crowley immediately took to Highland life, even donning the red and green tartan and adopting the surname of “Macgregor” after his friend and colleague, Samuel MacGregor Mathers. The ownership records of his proprietorship list him variously as “Alistair Macgregor,” “Alister Crowley Macgregor,” and “Lord Boleskine.”  It was at Boleskine that he engaged many enjoyable outdoor activities that the rolling countryside provided. He was especially keen on salmon fishing on the loch, rock climbing, and hunting red deer in his spare time—not to mention the rousing sport of a “haggis hunt” at the expense of a visiting friend. He jokingly wrote, “I lived the life of an ordinary Scottish laird…”

He would take frequent long walks through the woods and moors, resulting in an amusing anecdote he relates in his autobiography:

“On first arriving at Boleskine, I innocently frightened some excellent people by my habit of taking long walks over the moors. One morning, I found a large stone jar at my front door. It was not an infernal machine; it was illicit whisky – a mute, yet eloquent appeal, not to give away illicit stills that I might happen to stumble upon in my rambles. I needed no bribe.”

It was the seclusion of Boleskine House sitting amidst the bucolic landscape of Loch Ness in the Scottish Highlands that drew Crowley to purchase Boleskine House so that he could perform a difficult and demanding religious exercise known as “the Sacred Magic of Abramelin the Mage.” This was an elaborate ceremony originating from a mystical fifteenth-century manuscript called “The Book of Abramelin,” supposedly authored by a Jewish scholar going by the pseudonym, “Abraham.” The text outlines in an epistolary character that is very typical of the liturgical literature at the time  a method to speak directly with God by using magical prayers, mystical diagrams and invoking spirits for protection. This practice and its alleged end result, the “Knowledge and Conversation of the Holy Guardian Angel” intrigued Crowley, and he believed this mystical experience was the next step for humanity’s spiritual evolution even though he never actually saw the ceremony to its completion.

Already known for his expertise in climbing the more difficult peaks in England and glaciers in the Swiss Alps, it was while living at Boleskine that he would depart to undertake two historically significant mountaineering expeditions. The first was Chogo Ri, more commonly known as K2, in 1902 with his friend and climbing mentor, the famed mountaineer Oscar Eckenstein, inventor of the modern crampon. They would be forced back short of the peak due to a combination of inclement weather and health concerns. In 1905, he would lead a new expedition to Kanchenjunga, the third highest mountain in the world. The death of one of the team members, Alexis Pache, along with three porters in an avalanche would cause them to abandon this ascent. Neither of these peaks would be successfully conquered for another fifty years. 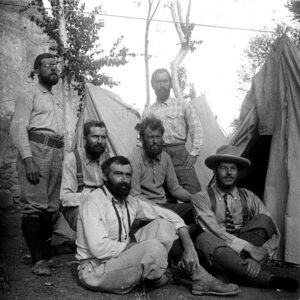 At the beginning of the First World War, Crowley would leave for America in 1914 in hopes to stay far away from what appeared to be a devastating European war ahead. He left Boleskine to the care of friends and acquaintances, and would ultimately deliver the ownership of the home to the fraternal organisation he headed at the time, the Ordo Templi Orientis. However, the economic stress of the war would necessitate the sale of the estate in 1918, much to Crowley’s eternal dismay. He would consider Boleskine House to be an important landmark for the rest of his life even after his ownership simply because it was the location where the “Sacred Magic of Abramelin” was attempted.

Crowley dressed as “Prince Chioa Khan”Both during Aleister Crowley’s lifetime and since his death, the popular press has sought to label Crowley as a dark figure associated with devil worship and black magic.

Many biographies on Crowley have been written, the most recent well-researched works include Perdurabo by Richard Kaczynski and 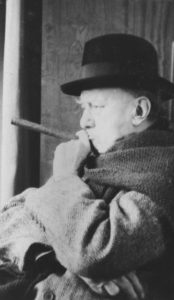 several authored by Tobias Churton. These biographies show Crowley as an artistically-spirited and well-humoured eccentric personality. He often took on different personas, whether he was attempting to embody the spirit or soul of an image for a specific intent or simply indulging in exoticism for its own sake. During his ownership of Boleskine, he referred to himself as “Laird Boleskine.” As a teacher of yoga, he called himself “Mahatma Guru Sri Paramahansa Shivaji,” and during his travels in Cairo in 1904, he took the pseudonym “Prince Chioa Khan,” dressing in a lavish silken jacket and wearing a long oriental beard. He even gave his own “Winston Churchill” impression in his later years.

In short, despite many of the popular portrayals of him in popular culture as a diabolical villain, Crowley was in fact a quirky artistic intellectual who lived a lifestyle that undoubtedly deviated from the mainstream culture at the time.